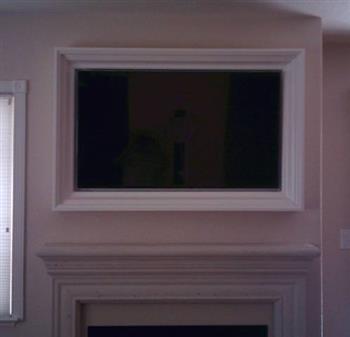 Here’s a pretty cool project, mounting your flat screen TV in a picture frame. This project for one of our customers started as an alcove above a fireplace, but you can do the same thing just wall mounted and have your electronics stashed somewhere else. With the alcove it allowed all the electronics to be hidden directly behind the TV.

With some carpentry skills and tools like a table saw, miter saw, and finish nail guns along with quality construction adhesive and it’s a fairly easy project to complete. Using crown molding, and various other wood stock you build up the frame, different crown molding profiles can be used for both personal preference and to help determine the final picture frame size. The other thing to pay attention to is what’s called spring angles on the crown molding, this will determine how flat or pitched the face of the frame will appear as well as affect overall dimensions of the frame when it’s complete. Play around with different sizes/profiles of crown, spring angles and wood stock to find the combination that you’re most happy with. We used 4 3/4″ crown, 52/38 spring angle, with 3/4″ mdf stock and 3/16″ flat stock to create this one. The finished picture frame has an overall depth of 5″ and width not counting the flat stock backing of just under 5″. While sorting out your design you’ll want to allow inside dimensions of the frame to give you about 1/2″ clearance/reveal around all sides of the TV for ease of use as well as air flow. The addition of flat stock to the inside of the frame at less than the TV dimensions helps really make it appear that it’s all mounted together on the wall and not just a frame stuck up around the TV without adding a lot of extra depth to the frame overall. 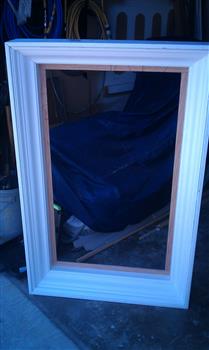 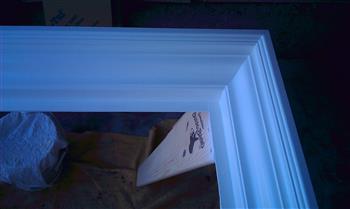 I don’t show all the details of step by step how to build this, your carpentry skills and a couple pictures should be adequate. I will say that the crown is nested into the stock that becomes the outside of the frame and sits on top of the stock that becomes the inside of the frame. All corners are appropriately mitered, glued and nailed together. The flat stock is added behind the inside frame stock also glued and nailed. And a series of blocks are added inside the back, from inside to outside of the frame to help it keep it’s shape for years to come.

We needed to patch in some of the front of this alcove, the TV and frame were not tall enough to conceal the entire height of the alcove. This worked out great anyway as it allowed more separation from the fireplace mantel to the TV and frame. We added framing for attaching sheetrock…mud, tape, texture, and paint to match and it looks like it was always that size. We added a little more framing inside the alcove to attach a shelf that would sit at the right height for accessing the electronics with the frame in place. Some more framing attached to the iniside walls/existing studs and some cross braces gave us a sturdy surface to install the TV mount to. This particular mount pulls out 24″ and pivots so the TV can be pulled out of the way easily to access the hidden electronics….for the most part once everything is hooked up, unless you have a hidden dvd or blu-ray player you won’t need to pull the TV out. (Hint:addition of an IR Repeater allows you to remotely control your hidden devices) 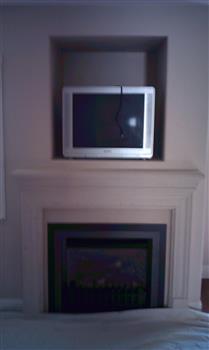 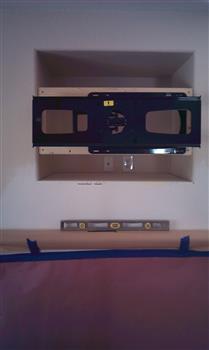 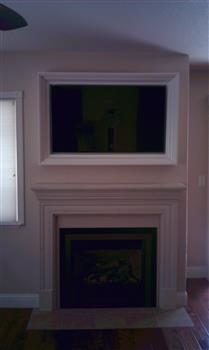 Securing the frame to the wall can be done in a variety of methods. The bigger/heavier the frame, the sturdier your mounting should be. Knowing I built this frame, I knew I could use 4 pan head screws through the flat stock directly into wall studs and it would stay up and in place until someone actually wanted to remove it. The screws are completely hidden behind the TV when it’s in place by keeping them inside of that 1/2″ reveal I mentioned previously.

If you’re just wall mounting your TV you will probably need a deeper frame, figure this out by allowing for the depth of the TV and the mount from the surface of the wall. For this project most of the mount recesses just inside the alcove. The framing the mount is attached to so we really only needed to account for the depth of the TV itself, this allowed us to keep a 5″ overall depth of the frame, with about 2″ inside frame depth. You could easily end up needing closer to 4″ inside frame depth to conceal both mount and TV when wall mounted.

Don and his company do A+ work. I’m always very pleased with the results 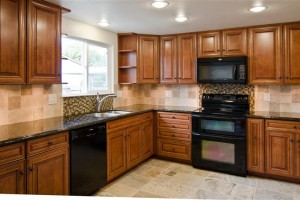 Kitchen Remodel in Vacaville, Ca. Some details about this kitchen remodel We completed this kitchen in Feb 2012. The cabinets are American Woodmark, … END_OF_DOCUMENT_TOKEN_TO_BE_REPLACED 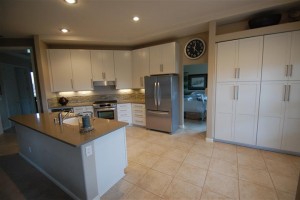